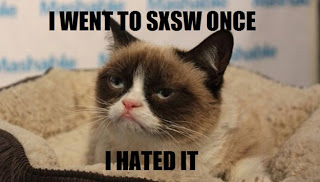 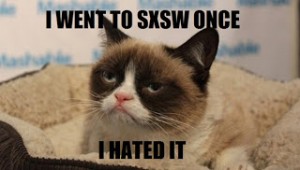 “Grumpy Cat” was a star attraction at SXSW

After a two year hiatus, I returned to South-by-Southwest (SXSW) Interactive for the 2013 event. As in the past, next week we'll start a series of posts sharing session insights and key takeaways so you can benefit from the experience, without the big price tag! But first, I wanted to respond to the many independent consultants who've asked me if they “should” go to SXSW.There are still good experiences to be had at SXSW, but you have to work to find the ROI. While in the past you could fly-by-the-seat-of-your-pants and have a successful event, that really doesn’t work anymore.

Once upon a time, South-by-Southwest (SXSW) Interactive was about ideas and connections. Today, it’s about corporations and commerce. For those of us who loved the conference of old, it’s hard to adjust and not draw (unfair?) comparisons.

Here’s my personal assessment of the good, the bad, and the ugly:

At one time, SXSW was the one place you could see almost everyone actively working in digital PR and social media. While that’s no longer the case (I knew I was in trouble when I was standing among eight of the top speakers at the Solo PR Summit, and none of them were going), there’s still a tremendous critical mass of interesting folks on site. Many who plan ahead manage to successfully connect with those they most want to see. And not everything has changed for the worse – the always popular Allhat party this year raised donations for the Horseboy Foundation, which brings the healing effects of horses to autism families.

Though there weren’t any breakout launches at this year’s event, SXSW remains a good place to learn about new technologies and see demonstrations of products you’ve heard about, but haven’t tried. This year, I heard the most excitement around 3D printing. Did you know there are “printers” that can make stuff out of plastic on demand – from jewelry to machine parts? Pretty cool.

I was also pleasantly surprised by the quality of the sessions I attended. Perhaps I’m getting better at picking which ones to go to, but I believe there’s truly a more professional approach to presenting at SXSW than in the past. Stay tuned for upcoming posts on some enlightening and thought-provoking sessions I attended. 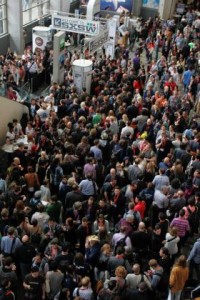 The crowds are out of control. While the content of sessions is better, they’re now spread out among different venues and often are closed to entry early, having reached capacity.

It’s not fun to ride a shuttle bus for 15 minutes to get to a venue 20 minutes early to see a session, and then get told its already over capacity, and oh, by the way, all the other sessions at that venue have reached capacity while you’re figuring this out, meaning you aren’t going to see diddly squat during that timeslot (yeah, that happened to me). I found it’s virtually impossible to see back-to-back sessions at SXSW, since by the time you get out of one and make it to the next (even if in the same venue), it’s reached capacity.

If I worked for a company that had paid my way, my expectations may have been a little lower. But as indie consultants, unless a client is footing the bill, an event like this is a significant investment for us. Full priced tickets to SXSW Interactive were over $1,000 – shouldn’t the organizers sell-out the event if there aren’t enough seats to accommodate attendees?

I also dislike that the growing emphasis on big brands means people who once had interesting conversations with you are now running off to demonstrate their company’s products, or to help host an invite-only agency reception for the high-flying brands they’d like to land as new business. This is one of the perhaps unfair comparisons to years past – the increased business-focus of attendees may be good for SXSW overall, but it’s a damper on the grassroots, community feel the event once had.

SXSW now reminds me a lot of COMDEX – a once must-attend tech industry event that eventually collapsed under its own weight. SXSW organizers should be wary of COMDEX's fate, or they are condemned to repeat it.

I didn’t actually see a velvet rope at SXSW, but figuratively they were everywhere. If you get excited by celebrities, cooler-than-thou hipsters, and working to be on the guest list of the best parties with all the right people (a la Studio 54), then you will love SXSW at night. Otherwise, get in line with the rest of the riff raff.

Yes, you may be able to get into the “hot” party (or any party, for that matter) if you have connections, but for indie consultants it’s getting harder. Without a big name agency or client brand behind you, your odds of being treated like a person of value at most of these events are slim to none.

I’ve always hated scenes like this (is there anything less cool than people trying to be cool?). On the plus side, you can learn a lot about folks you thought were your friends (“hey Mr. Aloof, I was nice to you when you were nobody, but good to know you’re better than me now”). Overall, it's not my idea of a good time, but I still managed to squeeze in some fun with a few good folks.

Attend SXSW?
I don't think SXSW is a must-attend for most independent consultants, but it's hard to resist the siren song.  A few tips, if you decide to go in the future:

Did you go to SXSW? Why or why not? If you went, what was your experience and feedback? Let us know in the comments!